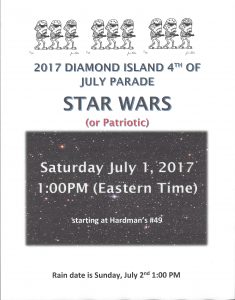 To all Diamond Island Association members.

With the 2016 season about to start, I thought I would update everyone on the status of the existing ferry and plans for its replacement.

Repairs to the existing ferry:

As you will recall, the membership approved the expenditure of up to $25,000 to repair the leak discovered last summer and to patch any other weak spots found on the hulls. Despite the structural inspection performed in 2014, which indicated that the hulls were in good shape, a number of other weak areas were found and patched.  Approximately 15 small patches were welded onto the hulls and several larger steel sheets were added to both ends for repair as well as re-enforcement.. Other minor work was also done to the main deck. The total cost was $22,500.

While the cost was at the upper end of the range that we anticipated, a number of our neighbors were responsible for keeping the costs under control. About 100 pounds of zebra mussels and barnacles were scraped off of the hulls, the entire ferry was power washed, and several individuals crawled into all of the compartments to assess the structural conditions from in the inside. Led by Bill Hullinger and Mike Andrasco, who gave up a lot of their holiday time, Dick Buck, Dennis Wauchop, Rudy Muessig, Wayne Smith and Bill Armstrong all deserve our thanks. Please acknowledge their efforts when you see them this spring.

It is the opinion of Bill Hullinger and Mike Andrasco that the ferry in its current condition could last another two or three years, possibly longer., without major repairs to the hulls.  However, given the age and condition of all the other components there are obviously lots of other things that may need to be addressed.

All things considered, the board believes it is in the island’s best interest to pursue a replacement ferry for delivery for the 2018 season. Such a timeframe would give us about a year to get educated and figure out what we want and can afford, six months to distribute a request for proposal and negotiate a contract and six months for the contractor to build, assemble and deliver the new equipment.

Last fall while evaluating whether or not to spend another $15,000-$25,000 on repairs, we pursued buying of a new ferry for delivery for this season. Starting with some research that Tim O’Leary had done previously we developed a specification and send it out to five or six barge builders that we found around the country. As was mentioned in a previous letter, we found that it is not possible to find a ferry/barge “off-the-shelf” that meets our requirements. There are lots of barge builders that supply the hulls but few, that we have found thus far, that are interested in putting all the other pieces together. That said, we did initially find two contractors that were interested in delivering the complete package. One of these contractors backed out after a month or so indicating that he was perfectly willing to build us the hulls but wasn’t interested in supplying a complete operating vehicle. The other contractor stopped communicating with us for several months but just responded with a bid the other day. We will be following up with this contractor, who happens to be local.  There are many advantages, both from a transportation cost standpoint as well as ongoing maintenance, to having a local supplier of the new ferry.

The specification we put together last year was based on the existing configuration of the ferry; twin hulls, the existing ramps, cable guidance etc. The main differences were using thrusters instead of paddle wheels and optionally handling six cars versus four. Given the extra time we have now that the repairs are finished there are many other things that we should be considering before making a final decision. So we intend to pursue all of these other configuration options over the next year before deciding on the final specifications. Some of these other things are:

Propulsion: There are pros and cons, specifically in the areas of cost, efficiency and maintenance, to using thrusters versus propellers versus paddle wheels versus water jets.

Ramps: Should the ramps be as they are today or part of the ferry? Having the ramps on the ferry itself might solve some of your other problems that we have both with ballast and with the ramps kicking up onto the underside of vehicles.

Length:  Should we have a six car ferry versus four to reduce congestion during peak usage. There are cost, docking and storage considerations to be evaluated.

Length/Propulsion: If the propulsion system could make the ferry go 50% faster than it does today we would not need the 50% greater capacity of six cars.

Guidance: Docking in high winds would be substantially easier if there were two cables versus one. The greater power of something like thrusters might make docking easier even in high winds without a second cable.

Other:  How the ferry is latched to the land for loading and unloading; the ballast system; payload; and the use of rust free materials, like plastic hulls are just some of the other considerations that we intend to look at.

Island residents Kevin Douglas and Ed Koranda, both professional engineers, have volunteered to help us in this process. They are essentially starting with a blank piece of paper to design a new ferry. They are creating a statement of work, an SOW in engineering parlance. This statement of work will include specifications and performance requirements as well as the professional acquisition tools, systems and discipline that a large enterprise might use in the process of acquiring a major asset. Kevin and Ed have provided us with version 1.0 of this document. The initial version is very broad and somewhat theoretical.  It covers a lot of things that after research and evaluation may or may not be practical or affordable. As Kevin and Ed continue to put more substance to their paper through research and analysis, we intend to continue to educate ourselves by site visits, conversations with barge builders, perhaps attending seminars and using the internet to search for forums or blogs that discuss barge operation, construction, maintenance etc.

I hope I have given you a flavor for where we are currently in this process and what lies ahead.  As we get further along we may reach out to many of you for assistance. If anyone thinks they can bring some expertise or ideas to this process please come and talk to us. If you have questions, please stop and ask either Phil Bottger or me as we are taking the lead on this project on behalf of the board.

Notice of SPECIAL MEETING (pursuant to Article III Sections 2,3 &8 of the By-laws)

As you all know from the discussion during the August Annual Meeting, a Request for Quotation was being prepared to be sent to prospective barge builders. The RFQ was sent to 7 bidders in October, however, the response has been disappointing as no one has been willing to submit a bid. Several builders were strictly in the business of building barges and did not offer any type of propulsion, much less docking systems and the like. Others withdrew because there were too many unspecified design components making it difficult for the bidder to quote a fixed price or because the missing design specs and complexity of the electrical and docking systems required them to find a partner with the requisite expertise, which was just not worth the time or effort.

Fortunately, we have been working on a parallel track to try to find an engineering design firm that would provide all the missing design components, including propulsion alternatives and the electrical and docking systems. In other words, provide a complete, specific bid package.

Seacraft Design, a Naval architectural and Marine engineering firm based in Sturgeon Bay, Wisconsin has submitted a proposal which looks very promising. The committee is in the process of working through various alternatives with Seacraft and negotiating the price. It may take another 3 or 4 weeks before we have the details worked out to our satisfaction, at which time we would be looking to sign a contract. Before we can commit the Association, however, we need owner approval. There is a 14-day notice period required before we can ask for a vote. If we proceed in this order it could be mid-May before design begins. We believe, and Seacraft concurs, that we still have enough time to design, bid and build the new ferry for delivery in March 2018, but there is not much time to spare.

To help accelerate the process we are seeking owner approval to engage Seacraft NOW.

Seacraft’s original proposal was for $51,000. A significant portion of this was due to all the unspecified variables that are in the RFQ. For example, the propulsion system was totally open ended. We would have considered paddle wheels, thrusters, or other systems that the bidder recommended. Same with the docking system: floating dock, ramps on the ferry, ramps on land, etc. were all in play. To reduce the scope and thus the price, we are going to go back to Seacraft with specific systems and/or components for them to design; such as paddlewheels for propulsion, as it is the least costly but most efficient of the alternatives.  As a result, we believe the revised price will be under $35,000 but are seeking authorization for $40,000 to have some flexibility. There is $54,500 in the barge replacement fund. Despite this added design cost, we are more confident than ever that the overall price will still be well with the range we projected in August.

If approved, we would proceed with the design phase and then begin work on a second RFQ to send out to boat builders. Ultimately, we will need to have another Special Meeting of the homeowners to review and approve the costs and financing of the new ferry. This probably will not happen prior to the next Annual meeting but we will know a lot more by then.

If you have questions about any of this please contact one of the committee members.

The Board of Directors